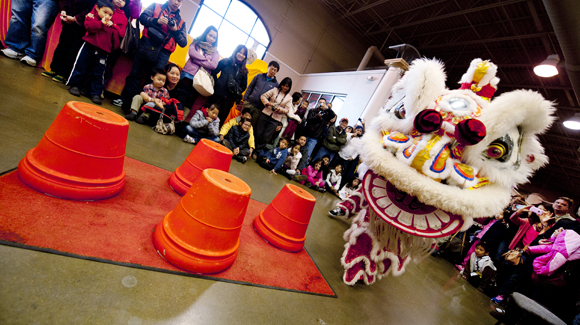 The Art of Southern Lion Dancing

The Fierce and Majestic Art of Southern Lion Dancing
by Sifu Jimmy Wong
taken from Internal Arts Magazine, 1990
The fierce lion of heaven brings the fortunes of good luck, prosperity, and happiness
to all those who are within the sound of his music.
– Old Chinese Proverb

Lion dancing is one of the most remarkable traditional arts depicting dignity, unyielding energy and courage. When the lion roars, all other beasts listen. The Chinese regard the lion as a good omen representing happiness, well-being, and prosperity.

Lion dancing is divided into two types: Northern Lion dancing, also known as Golden Lion, in which the two dancers are clothed in a complete body suit with golden fur, and Southern Lion Dancing, called Awakening Lion, in which the dancers are clothed in a brightly colored costume attached to the heavy paper mache lion’s head and covering the backs of the dancers like a cloak. The Southern dancers also wear brightly colored leggings and decorated shoes representing the lions paws.

History of the Southern Lion:
The Awakening Lion dates back long ago. There was an ancient tale about a wicked beast that came out in the New Year and killed innocent people. In order to defend themselves, people used bamboo rods and paper to make a fierce and colorful lion accompanied by the loud sounds of drums and cymbals to scare the beast away. As generations went by, people began using lion dancing for the New Year and festivals to celebrate as wellas to appeal for peace.

In Kwantung, China, the Fo San (Buddha Mountain) province is famous for its Southern Lion dance costumes and routines. There are five types of lion faces:

1) The seven color lion face has a yellow head, white eyebrows and beard, with three gold coins behind its head. This lion is called “Liu Be” lion, symbolizing good fortune, friendliness, gentleness, and harmony.

2) The red face lion has a black beard and eyebrows, green nose and purple horns. It has a red, black, and green coat and two gold coins behind its head. Red face lion is known as “Kuan Gong” lion, or Awakened lion, symbolizing energy, honor, and loyalty.

3) The black face lion has black eyebrows and a short beard. It has a green nose and horns with one gold coin behind its head covered with a black/white coat. Black face lion is called “Zhang Fei” lion, symbolizing bravery, fierceness, hot temper, a lion likely to make trouble for a good cause.

4) The yellow face lion has a silver beard is known as “Huang Chun” lion, symbolizing experience and knowledge.

To perform Southern lion, one has to pay special attention to the waist, horse stance, leg kicking, and lively kungfu-style jumps. Dancers must illustrate how the lion comes out of its cave, passes over a bridge, plays with a ball, knocks on doors, and climbs stairs. The lion dancers have to be highly skillful in their positioning, steps, and turnings. The dancers’ legs and arms must be strong to withstand the rigorous steps and deep stances while supporting the heavy costume. Only the dancers with impeccable kungfu stances and power can make a winning team.

The dancers have to be careful in following the many traditions and customs of lion dancing. Examples are when passing a Buddhist temple. The lion must stop and bow three times; on happy occasions, the lion must go into homes and congratulate the family; the lion must keep the drum quiet whe passing by a funeral; when two lions meet, they must bow to each other then let each other pass; if a dragon and a lion meet, this means peace in the world, and the dragon and lion therefore dance to celebrate peace on earth.

“Cai-qing” (plucking or getting the green) is a special program of Southern lion dancing. The meaning behind Cai-qing was to resist the Ching Dynasty and restore the Ming Dynasty. Nowadays, people use green lettuce with “hong bao” (lucky money in a red packet) in it to represent luck in making money. Cai-qing must be experienced in kungfu, good reflexes, and great knowledge. Types of Cai-qing include: high rise, bottom of a bridge, a crab, passing the poisonous snake, baqua (eight triagram) barricade, etc. There are also different ways of playingthe drum; each has its own style and characteristics.

Southern lion dancing has a close relationship with Buddhism. Before the lion performs its first dance, it has a ceremony for its birth. This ceremony involves every member of the lion dancing team. A highly respected elder will lead the members in paying hommage tho the Buddha and will be responsible for lighting and bringing life to the lion’s eyes, nose, horn, ears, body, and legs. There will also be gold flowers and leaves on the lion’s head. Whenever the lion group is ready to dance, they have to perform a mantra-type ceremony for good luck. The Southern lion is almost always accompanied by a dancer in a paper mache mask representing a smiling monk who leads the team.

Today there is a growing interest in lion dancing as a sport by many American, European, and Asian kungfu schools. Competitions are being held around the world for lion dance teams.

About the Author:
Sifu Jimmy Wong is the founder of the America Chin Woo Athletic Association, based in Dallas, Texas.

No Comments to "The Art of Southern Lion Dancing"