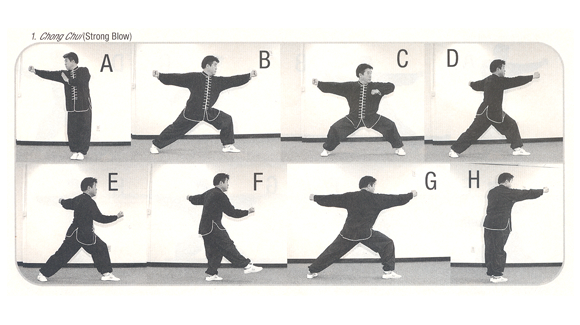 This is Part II of our series on Tan Tui. Click here for Part I of Tan Tui series.

Mr. Lu Wei Change, one of the 3 members who reopened the Chin Woo school following Grandmaster Huo Yuan Jia’s passing, emphasized the importance of Tan Tui in history books based on his own experienced. Mr. Lu was very weak when he was young, and often became sick easily. However, after 10 years of training the Tan Tui, he became strong and was even able to help protect the country.

In the beginning, his family discouraged him from training Tan Tui, telling him it was a waste of time. He refused to take their advice and instead trained very seriously for the next 10 years. Not only did he become strong, but he learned discipline and gained much wisdom. He became very alert and was able to “see” things better.

Mr. Lu noted how his first 3 days of training were the toughest. He was very sore and tired, and his family discouraged him from continuing. He refused to listened and continued to train even more seriously despite the pain. After 2 weeks of continuous training, he felt his energy become very strong. Curious, he asked his teach why this was. The teacher told him that his old weak muscles had been replenished by the new energized muscles and that was why he became stronger.

Mr. Lu did not fall sick as much as before, and his appetite improved. He not only started to develop stronger muscles, but his lungs also grew stronger, and he felt high in spirit. During his training, he found that he used a lot of force from the waist, and that he had to use his mind to control the waist and in turn to move his legs and hands simultaneously. This was the “spring” in Tan Tui. He also found his coordination improving, and therefore he was more alert – not just in training, but even in his everyday work.

Check back next week for our next for Part III of our Tan Tui series.

No Comments to "Lui Wei Chang’s Take on Tan Tui"